Lumine, one of Spain’s flagships golfing venues, eagerly awaits the arrival of competitors for the 2019 European Tour Final Qualifying Stage –

Dubbed one of European golf’s most exciting annual storylines, with drama and heartache unfolding under intense playing conditions, Q-School is visiting the Costa Daurada coastline for the third consecutive year.

Players from over 30 countries will descend on Lumine’s fairways having earned their places via satellite tours, Second Qualifying Stage or from narrowly missed out on retaining their playing rights during the 2019 European Tour season.

The 156 hopefuls will battle it out over 72 holes, before the field is reduced to 70 players for an additional two rounds. That means 6 rounds of high intensity and exceptionally pressurised golf in just six days, fighting for just 25 spots on the European Tour for the 2020/21 season.

This season has also left notable names fighting to secure their European Tour status, including Marcel Siem Grégory Havret, Laurie Canter and Matteo Manassero. This week’s final stage really could be make or break for many players, as the opportunity of missing out on lucrative prize pots and teeing it up with the world’s best at Rolex Series events becomes a harsh reality.

Calle Carlsson, Lumine General Manager commented: “We are delighted to have again been chosen to conclude The European Tour Final Qualifying Stage. We have continued to prove that Lumine is a fitting stage for such an important and historic event. Undoubtedly, this is testament to the hard work the team has put in over the years in preparing a fair but challenging test for some of the finest golfing prospects.

“This event is like none other and there is something unique about the atmosphere of Final Qualifying,” continued Carlsson. “Competitors careers could be decided by a single shot which certainly puts the pressure on, and not only for the competitors but in terms of our preparations, too. We have 36 holes to prepare immaculately and we have worked hard with The European Tour to ensure the Lumine test is as fair as possible, but also fitting to find the players who are ready for golf’s biggest stage.”

Hopeful competitors will begin the event by testing their courage against the Lumine Hills Course, a challenging tree-lined layout amongst undulating terrain and tricky greens. With pressure intensifying, the 18th hole should provide plenty of drama as this driveable par-4 is protected by both water and well positioned bunkers; who will have the nerve to pull out their driver.

If the Hills Course wasn’t eventful enough, the Greg Norman-designed Lakes course, measuring around 6,900 yards from the Championship tees, will be at the heart of event proceedings. Weaving through the Tarragona landscape with water prominent on 13 holes, there will inevitably be career-changing moments as the week plays out. 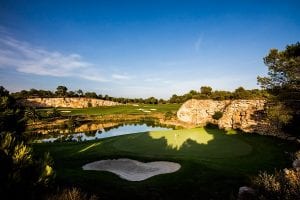 Stay up to date with all the action, and behind-the-scenes insight by following Lumine’s social media channels: Read about the renovations at @IslandGolfClub by Martin Ebert (of @golfarchitects) in the Summer 2020 Destination Golf Global Guide. https://t.co/t1AqeieX7o @Dest_golfguide

Yesterday's pic was of the 6th hole @RMusselburgh